Special PMLA court declares Vijay Mallya a fugitive economic offender. His properties can now be confiscated by the government.

Prevention of money laundering  court has ordered to take all his property. Vijay mallya has took loan from 17 indian banks of total amoun... 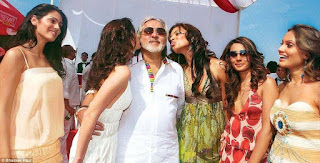 A major and a soldier of Indian army was killed by Ied blast at LOC Kargil.

Near to the LOC Rajauri dist in naushahra sector on Friday,  ied bomb blasted which injured a major and 3soldiers. Sources describe that the bombs were planted by Pakistan crossing the LOC. 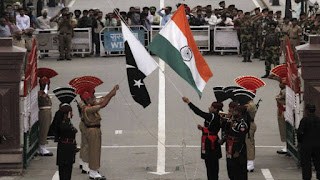 An Army major and a soldier were killed while two other soldiers were injured in an IED blast, suspected to have been planted by Pakistani terrorists along the Line of Control (LoC) in Rajouri district on Friday.(AFP)
Two Indian army personnel, including a Major, were killed on Friday in the deadliest attack along the Line of Control with Pakistan in nearly three months.
The attack came even as the Pakistani establishment signalled it was open to peace talks, though people in the Indian defence establishment – the army chief being the most recent – have seen such attempts as being hollow.
A spokesperson did not confirm the identities of the casualties, but according to multiple officials in the army and intelligence agencies, the attack involved two explosions and the Major was killed in the second one when he went to rescue a soldier hit by the first blast.
“Today (Friday) at about 3pm, an improvised explosive device (IED) explosion took place near LoC in Nowshera Sector in which an army officer and a soldier got grievously injured. Immediate resuscitation and medical aid was provided to them. However, they succumbed to their injuries,” said Lt Col Devender Anand, defence spokesperson.
Three other soldiers were injured by the blast.
An army porter was also killed by Pakistani snipers in the same district but during a separate incident.
While officials did not give details of the identity of the attackers, such incidents near the LoC routinely involve a specialised Pakistani squad called the Border Action Team (BAT), which is believed to comprise Pakistani army regulars as well as militants.
Earlier this week, Pakistani prime minister Imran Khan accused India of rejecting its peace offer. “India was offered to take one step towards and we shall take two. But India rejected Pakistan’s offer for talks several times,” he told Turkish news agency TRT World.
On Thursday, army chief General Bipin Rawat there has been little change in the Pakistani military’s approach. “Pakistan has been making a lot of noise about better relations with India but on the ground we do not see any difference,” he said.
According to officials in the intelligence, who asked not to be named, some of the other soldiers injured were in a critical condition.
Referring to the death of the porter, the spokesperson said the attack took place in Sunderbani sector. “Army porter Hemraj was shot at and grievously injured. The individual was provided immediate resuscitation and medical aid. He, however, also later succumbed to the gunshot wounds. The Army authorities have promised all possible assistance to the family of martyred army porter,” Lt Col Anand added.
The porter was carrying supplies for the army posts on the LoC in Laam area when he was hit, according to officials in Jammu who did not want to be named.
On October 21, three soldiers of Jammu and Kashmir light infantry regiment and two heavily-armed infiltrators, believed to be members of BAT, were killed in Sunderbani sector.

On September 19, roughly a month after Khan took over as Prime Minister, a jawan of the Border Security Force was dragged over to Pakistani territory and killed, with his body bearing signs of mutilation.
Posted by Unknown at 2:50 AM No comments:

Special PMLA court declares Vijay Mallya a fugitive economic offender. His properties can now be confiscated by the government.

Prevention of money laundering  court has ordered to take all his property.
Vijay mallya has took loan from 17 indian banks of total amount of 9000 crores.
Mumbai

Vijay mallya age 62 has been announced by prevention of money Laundering court on Saturday  that he is a runaway from India.
Special PMLA court declares Vijay Mallya a fugitive economic offender. His properties can now be confiscated by the government.

NEW DELHI: A special court in Mumbai Saturday declared absconding liquor baron Vijay Mallya a fugitive economic offender (FEO) on a plea of the Enforcement Directorate.Mallya has become the first businessman to be declared EFO under the provisions of the new Fugitive Economic Offenders Act which came into existence in August last year.The ED had requested the Prevention of Money Laundering Act (PMLA) court that Mallya, who is currently in the UK, be declared a fugitive and his properties be confiscated and brought under the control of the Union government as per the provisions of the new FEO Act. Special judge MS Azmi declared Mallya an FEO under Section 12 of the Act after hearing extensive arguments from the lawyer of Mallya and the ED counsel.Mallya, accused of defaulting on loan repayments and money laundering, had left India in March 2016.—PTI

Posted by Unknown at 1:27 AM No comments:

70 years old was the mastermind of kidnapping. 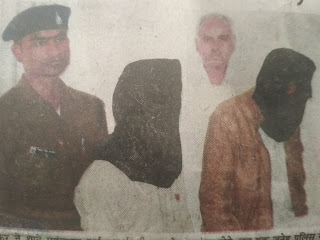 Rewa m.p.
In the janeh police station area a retired gramsevak was kidnapped but police solved the case in 3 days. The police has arrested two victims of the incident and found the gram Sevak in Well condition and the victims asked for kidnapping money about 500000 rupees and the police found the money as well. The incident took place on Friday, Additional SP Ashutosh Gupta describe the incident in police control room.
Additional SP Mr Gupta also told media that on 1 January in the Janeh Thana gram kapdaura resident retired gramsevak chhedilal kol was being Kidnapped by unknown rascals offering retired gram Sevak to work on their farm and clear the boring machine and also settings of farm. The incident was a big problem for the family of Chhedi LAL kol , his son lodge the complaint in the nearest police station Janeh Thana. The Thana incharge or town inspector mr Rs Singh Bagri started searching the location of the rascals with the help of Umaria police and Got them. It is told that Mr Chedi Lal kol was took to Umaria because he holds a account in Umaria so kidnappers withdraw 500000 rupees kidnapping money. The kidnappers withdrawal 500000 rupees from the account of Mr Chhedi Lal kol but before they get away with the money a tragedy happened when Janeh police with the corporation of Umaria police planned operation to arrest the kidnappers. All the kidnappers was being located from Every side and then they were unable to escape. The retired gramsevak Mr Chedi Lal kol is found good condition. According to the police the kidnappers muqaddam Khan son of late rahish Khan resident chakmirapatti  district Prayagraj Uttar Pradesh And a car driver Aslam Khan son of Majid Khan resident mundera Mandi Thana ghuman Ganj was involved. But other kidnappers Guddu Khan and liaqat Ali residents of chakmirapatti are running by police.
Posted by Unknown at 9:57 PM No comments:

Pujara broke the old record of 90 years, pant became the king of Asia.

4 Jan, 2019
Sidney,Australia
After Cheteshwar pujara wicketkeeper Rishabh pant played a long innings hitting century, while India  in 4th cricket test on Friday match played  long innings  making the series one boy Indian by the large score of 622 runs this is the India's first innings in the land of Aussies and gave them a big surprise of winning this match in single innings. In second day Australia without losing any wickets made 24 runs. Australia is very far away from the high score of India 622 runs following by lead of 598 runs  in second day. India has crossed 32times in test cricket 600 runs club. while Australia has entered the club of 600 runs for 34 times in his test series. Pujara missed his double century on the foreign land but his 193 runs innings broke the bones of Australian bowlers. Pujara in his innings played 373 balls and 22 boundaries wild Rishabh pant played 189 balls and 15 boundaries and a maximum with the score of 159 runs not out registered a new record in his name. Rishabh pant is the first Indian wicket keeper batsman to hit a century in the land of kangaroos. Ravindra Jadeja scored 81 runs with the half century challenging the kangaroos to work more and more hard work this is the Ravindra Jadeja who once again proved himself that he can give the best results to Indian Cricket board. Pujara spreaded his innings by 130 runs in Kangaroos land and scored his high score.
Prince Singh
Rewa m.p.
Posted by Unknown at 9:10 PM No comments:

A man found sex tape of his wife killed Infront of his children. 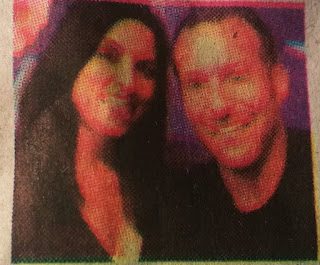 Washington, JNN.
A man killed his wife while she was asking to spare her life Infront of there Child in Florida America. Actually the man got a video tape of having sex between his wife and her best friend. Then husband also killed his stepmom and stepdad. In the reports of 'The Sun' , William Rislavel age 39 years and Mona had twin babies of just 5 years old. When he was firing, His crying child said no dad, I don't want to see anyone dead. It was the celebration of new years eve when the incident took  place in his stepmoms home first he killed his wife and then his stepmom and stepdad. After this incident William was arrested. While police came and took the evidences with proofs. Mona loudly asked his children to run away quickly then children with 3 dogs ran away successfully from the house
Posted by Unknown at 8:39 PM No comments: